The Vijay Vilas Palace rises from a multi-acre estate along the coast near the town. This palace of His Highness Maharao Vijay Singhji, who ruled over Kutch in the 1940s, is an eclectic blend of architectural styles. Umbrella-domes like those seen in palaces of Bengal, cupolas that would not look out of place in Mughal buildings, jarokhas and cusp-arches like those seen in Rajput palaces of Rajasthan, Victorian Gothic arches and classical columns make up the ensemble. Yet the architects were skilled enough to make the entire complex look harmonious.

Visitors can see the interiors including offices where the Maharaos worked from dawn to afternoon, the rooms for entertaining, the old living quarters. The domed terrace has a view over the estate to the sea.

The palace is nestled in 450 acres of lush greenery, with 2 kilometers of private beach. The Vijay Vilas Palace has its own private sanctuary maintained in an eco-friendly manner to preserve its pristine beauty. In this sanctuary one can see blue bulls, jackals and an occasional chinkara. One can also see peacocks frolicking in the palace grounds as well as partridges and other birds of the forest. This palace has been used as the setting in many Hindi films and has now become a popular tourist destination. 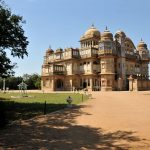 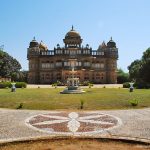 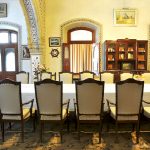 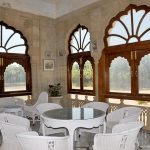 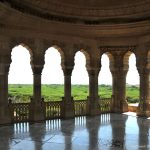 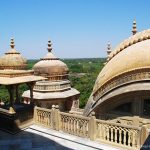 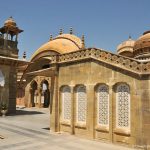 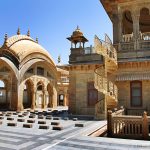 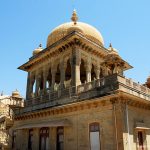 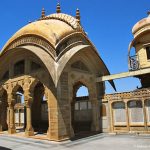